"Kenny was not just my closest friend growing up; he was my best friend. 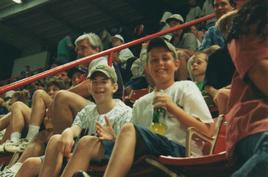 He always treated me with respect like a true friend should. He was like a brother to me and I'll never forget that.

I regret not being closer to Kenny after hearing about his diagnosis, but seeing all of those that have supported him and carried on his memory and legacy are a reminder that he was loved by so many people.

It is a testament to his character and his unwavering loyalty that his memory lives on so strong. Kenny's compassion and kindness should serve as a model for how everyone should treat one another on a daily basis.

To this day, when there's an obstacle or struggle I'm facing, I think of Kenny and I know that I can get through whatever stands in my way."
​- Matt Pagirsky, best friend since childhood, 2013

"I remember that Kenny and I used to play Super Nintendo...

at both of our houses and that we sometimes had to compete for the TV when NASCAR was on. I am truly sorry for the loss of someone who we all cared about.  I wish you the best of luck and success with the scholarship you are starting in his name."
- Lawrence L. Hallock Jr., Childhood friend

"Ken, I don’t know why I’m writing on your wall, and if you were here you’d probably chuckle and call me an idiot.
There’s not a day go by that I don’t think of you, Ken, whether its memories of us going to lollapooloza or toilet papering our best friend’s house where I almost ran over… you know who. I love you, Ken, and I miss you very much."
- Courtney Judge, friend from South Side High School

"I knew Kenny through high school; we sat next to each other in a couple art classes. I remember 11th grade he chose to do all his projects on psychology and the mind. I remembered him being incredibly intelligent, and at the same time, the one memory that sticks out furthest in my mind- was Kenny's laugh. He laughed constantly, and had the ability to make all of us laugh to the point where it hurt. Even though we only had a few classes together, I remember him being good company. The ability to put people in a good spirits came so natural to him."
- Jessica Roseboom, friend from South Side High School

“When I heard the news a while ago...

about how Ken didn't enroll for the fall 2005 semester because of his sickness I was upset about it.  He talked to me about visiting Albany for a weekend or more to hang out with me and some of his other poker friends but we never got around to it.  It pains me to hear about his passing away and to know that it happened to a poker player whose skill I had a great admiration and respect for.  Ken and I never hung out outside of our poker games, but I'm not hesitant to say that we enjoyed our fair share of conversation and good laughs during the in between of hands being dealt at the poker table.  Sometimes when he came over on a Friday or Saturday night to play cards in my dorm, he'd sit down in my room and play poker on my computer or play video games on the TV in my room enjoying the interactive fast paced action that's available to the new generation of video gamers.  From what I know about Ken outside of poker, he was a very good student and held ranking in scholarship/academic groups. Truly a friend of Ken's,”
- Hevad Khan, friend from SUNY Albany and fellow poker player

"I knew Kenny mainly from Wilson summer camp-both as LITs, and later leaders. Kenny was always easy going, loved to have fun, and never seemed to get stressed out, or worried like some of us would.  It was as if he just knew not to worry about the smaller things in life because in the long run they just aren't important and something to fuss over.
Overall, he was just a great guy, and friend who will truly be missed."
- Loramarie Muratore, friend from South Side High School and RVC Recreation Center

"I didn't know him for that long, but I'm so glad that I knew Kenny at all because he was always smiling and joking.  I know he was a good person and he was always willing to lend a hand- he always said that to me."
- Ricky Mosback, friend from SUNY Albany 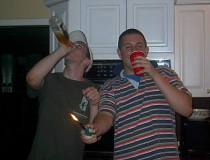 -7 years ago. I took most of those years for granted without ever realizing just how fortunate that i was to have such a great friend as Kenny.

So when only several months ago when I heard that Kenny had cancer, a lot of things began to fall into place. I realized how lucky I was to know someone who was not only extremely mature for his age and had a variety of talents, such as skiing and scuba diving, but also was such a genuinely good human being.

Over the very last few months that I was able to spend with Kenny, be it in the Hamptons with a bunch of other great guys who I never would have met had it not been for Kenny, or simply talking to him online or on the phone, I began to fear just how much I could lose if he were to pass away. I think that being able to spend that time together even if it was only for a few days and even if the plans did not work out the way we wanted them to was still some of the best moments for not only Kenny but for me and everyone else.

I imagine that if I were to able to talk to him now he would tell me not to take this too hard but to try to live in the present with a good attitude. I hope now that everyday when I get out of bed and look in the mirror that I'll be able to be even half as strong as he was both in the middle of his life, when I first met him, and towards the end when I had no choice but to say goodbye.”
– Dan Greenbaum, best friend from SSHS
Copyright ©  2019 Ken Pribil Jr. Foundation, Ltd. All rights reserved.